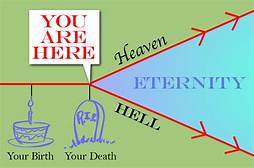 Jesus said, “But I will show you whom you should fear: Fear him who, after your body has been killed, has authority to throw you into hell. Yes, I tell you, fear him.” Luke 12:5 NIV.

Did you grow up with “Hell, Fire, and Brimstones” sermons? Do you skip the subject of hell when you present the gospel? Some say, people will turn to Jesus as their savior if you can “scare the hell out of them”.  Fear is a strong motivator. You probably know a person who made a commitment as a child, said a prayer of forgiveness (with no actions of repentance), for the express purpose of having “eternal fire insurance”.

Our verse does not tell us to fear “hell” by itself. Rather, we are to fear God who has the power and authority to send people into eternal punishment. Jail is a bad place to be, but a judge is the gatekeeper for the sentencing of the length of stay. God alone is judge.

However, Jesus reminds us again and again that God our Father loves us and we have the privilege to respond to that love. Yet, he remained consistent that we should fear God becasue of the eternal consequences for not trusting in him. Notice the following emphasis by Jesus on eternal torment in this excerpt from an article on May 11, 2017 in The Gospel Coalition by Leslie Schmucker.

Jesus doesn’t only reference hell, he describes it in great detail. He says it is a place of eternal torment (Luke 16:23), of unquenchable fire (Mark 9:43), where the worm does not die (Mark 9:48), where people will gnash their teeth in anguish and regret (Matt. 13:42), and from which there is no return, even to warn loved ones (Luke 16:19–31). He calls hell a place of “outer darkness” (Matt. 25:30), comparing it to “Gehenna” (Matt. 10:28), which was a trash dump outside the walls of Jerusalem where rubbish was burned and maggots abounded. Jesus talks about hell more than he talks about heaven, and describes it more vividly. There’s no denying that Jesus knew, believed, and warned against the absolute reality of hell.

One who fears God properly will have a sober minded response to the eternal destiny of mankind regarding both heaven and hell. The certainty of an eternal destination of hell after death for those who are not in the Lamb’s book of life, is one of the harshest realities of faith in Jesus.

If you feel a little unsettled….so do I. Oh, that none should perish without first believing.