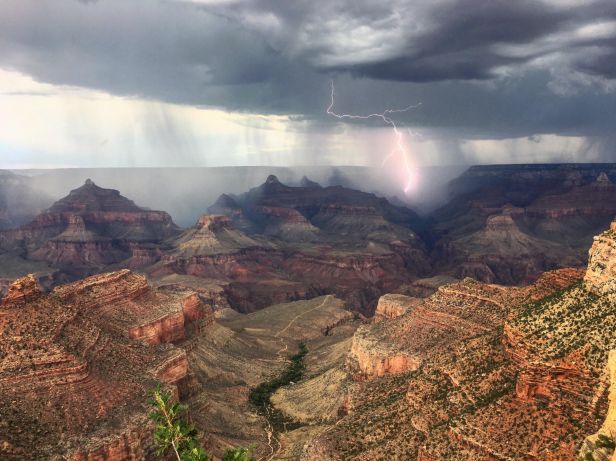 For you have been my refuge, a strong tower against the foe. Psalms 62:3 NIV

It was a dry, beautiful, sunshiny day when our group of 20 youth and adults started down the path to the bottom of the Grand Canyon. We had been at the Navajo Nation in Arizona for over a week and our lungs had adjusted somewhat to the climate and altitude. I wanted to go to the bottom and back, but we did not have enough time.

After about an hour of slow going we decided to turn back as the descent began to increase at a greater intensity. As we turned around we saw a distant thunder cloud and rain storm making its way through the Canyon…in our direction. We were caught out in the open.

I remembered a cleft in the rock about ½ the distance that we had traveled. I hurried the group back up the trail. The cleft started about 8 feet tall and worked its way back into the canyon wall much like a triangular shape. There was enough room for us all to move inside and watch the storm pass. We watched, heard and felt the rain, lightning, and thunder pass in front of our secure position. Beautifully, AWESOME.

At his present point of need David is reflecting back to the places that God had been a place of refuge. He remembered twice how he had remained hidden in a cave in which King Saul also entered, while he was pursuing David to take his life. In the darkness of the cave, David looked upon his enemy.  God allowed David to be safe in the refuge of the cave.

You are aware that a refuge is a place of safety away from the enemy. Equally important,  a refuge is also a place of respite to gain a new perspective. David had opportunity to kill King Saul while he slept in the cave. David’s men encouraged him to take Saul’s life suggesting that God had delivered his enemy into his hands. David could end the their fears and plight

Where can you go or what activity can you participate in to gain a new perspective?

God is the same yesterday, today and tomorrow. If He has been a refuge for His children in the past, He will be one today and in the future. You have the freedom to pass by the place of refuge or you can intentionally run into it. In that place, rest as God reveals His love and plan to you.