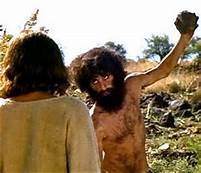 The people were all so amazed that they asked each other, “What is this? A new teaching—and with authority! He even gives orders to impure spirits and they obey him.” 28 News about him spread quickly over the whole region of Galilee. Mark 1:27-28 NIV

I have a pastor friend from Africa, John Mokiwa, that I met in seminary. His testimony includes the story of a demon that lived on his newly acquired home. After physically seeing the demon and it’s influence over his wife, John begged an evangelist, that just so happened to be leading a crusade in his town, to come to his house for help. The evangelist prayed for his wife, and cast the demon off the property. John and his family came to salvation. When I asked him about getting rid of demons, he smiles and gives a simple answer. “It’s easy to deal with demons, we have Jesus authority.” He gives a little giggle as he reflects on his freedom.

Does your theology make room for demons and their influence over people? Do you wrongly think that demons only live in Africa or other under developed countries? Do you think that demonic influence has disappeared or diminished in this day and age? Does the subject make you fearful or uneasy? Would you know how to identify the presence of a demon who is harassing a person? Would you agree that not all mental illness and sickness is demonic, but some of it is?

Jesus had at least 11 recorded significant encounters addressing the demonic. He was not a deliverance minister, but he did minister deliverance everywhere he went. He healed the sick and other times he cast out demons. To Jesus this was not a sensational part of his ministry, he just did what was needed.

He gave his disciples authority over unclean spirits that they were to use when they shared the good news. At one time they came back so excited that the demons were subject to Jesus name. He redirected them to the priority of salvation, but did not diminish the impact of their prayers. He commented that He saw Satan fall from Heaven. Many believe that Jesus was referring to Lucifer’s fall from God’s throne. I think He was also referring to their influence of their ministry that was bringing the Kingdom of God to the earth, thereby supplanting Satan’s hold.

All followers of Jesus have authority over demons. Some have a gift from the Holy Spirit of discernment and words of knowledge which are needed for deliverance. Deliverance occurs through the command of words under God’s authority in Jesus name. There are no spells, rituals or hiding behind a cross. As a follower of Jesus you simply speak with authority and the demon must obey to leave. There are other factors of confessing sin and open doors that have an impact in effectiveness of the process, but it still will come down to speaking God’s word under the authority of Jesus name.

There is way too much info to share in this one blog. I will share more insights from week to week concerning deliverance and freedom from evil spirits.  I believe God’s Word. If Jesus encountered demons, then they are real and can oppress and possess people. The apostles also encountered demons after Jesus resurrection. There is freedom. You don’t have continually live under the power of demonic oppression.

Jesus came to set the prisoners free. This is true of the bondage of sin and the deliverance of demons. Does your love for Jesus include His ministry of authority over the demonic? The people were amazed to see Him cast out an impure spirit by speaking a command – with authority. You have that same authority.

2 thoughts on “Is There Room in Your Theology for Demons?”