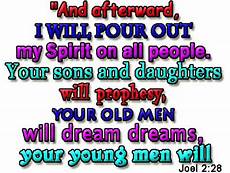 “‘In the last days, God says, I will pour out my Spirit on all people.

Your sons and daughters will prophesy, your young men will see visions,

While on a mission trip in Africa, I had a dream that occurred two nights in a row. The first night our group was in a car and there was danger around us. I told the group and we prayed for safety. The next night, I dreamed that the car was involved in an accident and that we were not supposed to stay for the police. I only told Pam about the second dream as I did not want to increase the alarm.

A couple of nights later, I was driving on a rainy dark night in the middle of Tanzania trying to make it back to our departing city. No lines were on the road to help with navigation, so I was following a large truck to protect against the lights of oncoming traffic. Suddenly the truck slammed on brakes which I also did. We hydroplaned to the far side of the rode and hit a cyclist carrying firewood. He actually jumped off and let the bike hit the car. I was rattled. We heard lots of people in the dark scattering away from a wreck.

Our African host, told us to quickly get back in the car. I wanted to check on the man that jumped. I was told, “No! We must leave now.” After a few minutes of debriefing how I could have avoided the accident. our host spoke. “We do not wait for police in the bush. You must pay whatever they ask or they will beat you and then rob you of your possessions.” Silence was in the car. We realized God’s protection occurred within only a few seconds of obedience. Had we no left immediately this would be a much different story.

Peter used Joel’s prophetic word to explain the outpouring of the Holy Spirit on the day of Pentecost. First he mentions that the Spirit would be poured out. The expression “Pour” means to spread liberally, run greedily (out), or bestow. For followers of Jesus, for those who call upon His name for salvation, it was now understood that the person of the Holy Spirit would fall liberally upon your life.

What would be the outcome to this gift of outpouring? Joel did not limit the number of identification markers of the presence of the Holy Spirit, but he did include three. First, your sons and daughters will prophesy. This word literally means speak forth what God is saying. It is a NOW word that has implications about the future. It is not primarily focused on foretelling future events, but rather, how a person should respond now to God’s revelation. At Pentecost, the people asked what must they do to be saved and 3000 became followers on that day.

Secondly, God would speak to His followers in visions. Lots of people in the Bible recorded their visions. It’s simply an image or short scenario that is played out in your mind while you are awake. Zachariah’s vision in the temple about the birth of John the Baptist, Isaiah’s vision of the seraphim, Peter’s vision on the roof, or Paul’s vision of the 3rd heaven, are all examples of God speaking through visions. Visions are more future oriented in their message. There is still a response that must be taken to follow the vision. Isaiah now had to proclaim God’s word with boldness after his tongue was cleansed.

Thirdly, the older men would dream dreams, although having a dream is not limited by age or gender. God spoke through dreams throughout the whole Bible. Joseph, the coat of many colors dreamer, Joseph the husband of Mary, and Daniel are examples of God speaking to the person through dreams.

Dreams usually require interpretation. The objects within the dreams are symbolic and usually not literal. For example, many of my interpreter friends have said that vehicles and other modes of transportation in a dream are representative of ministry activities. A bicycle or car would possibly represent a smaller action that God may be asking an individual to take where as a train or plane might indicate a direction for a larger group of people. The key is to record the dream as quickly as possible so that you have clarity to share for interpretation.

The difficulty with embracing all three of these forms of expression of the Holy Spirit is their subjectivity. How do you know if a dream is from God or just your mind working in the night? Not all visions are from God…but some are. How do you know the difference? To speak prophetically requires faith and a boldness that you are indeed speaking what you believe God wants you to say.

The guardrails for determining if God is truly speaking for all three expressions are the word of God and submissiveness to spiritual leadership. God will not ask for a response that is not consistent with His character as revealed in His word.  He will not ask you to hurt an enemy, when Jesus has told us clearly that we are to love our enemies.

The word of a prophet is subject to the prophets. The means that a person carries the word with humility and not arrogance. No attitude of “i told you so.” should accompany a prophetic word. Be willing to let leadership and other trusted friends guide if a word is from the Lord. If it is true, even if they reject it, the word will still come to pass. Consider Joseph’s dreams with his brothers. The key is to deliver the message and not dictate the response. Jonah wanted Nineveh to suffer, God was looking for mercy.

Sorry for the longer blog. I want to bless you with greater ability to hear and respond to God’s voice. He still speaks to His people in prophecy, visions and dreams. May you grow in your ability to hear and respond to the outpouring of the Holy Spirit in your life. “Do not be afraid”, the angel told Zacharia. “Your prayers have been heard.” How is that for a sign that God is listening to your prayers?